Interesting week, I think that’s the first time I attend a sprint where I don’t write a single line of code. Wait! What? Me? Not writing code!? Yes… I guess it was doomed to happen since I’ve been doing more and more sprint organization lately.

This one was a bit special though, I’m not really a very active contributor of our workspaces. I care about them of course, but I just provide a patch here and there from time to time. Lately, there’s been new blood getting involved in the workspaces, which is great of course, but that’s also challenging. When you get such a community growth, it is often difficult to keep everyone on the same page.

I’ve been doing organization work, I care about our workspaces, and I’m a rather neutral/free agent in that area so I decided to attend. Indeed, it seemed that I had a proper profile to facilitate the meeting, and help integrate people, so I tackled that task. It was probably risky in retrospect, but no one got hurt, that’s a good sign. ;-)

Of course, since I’m working on KDE Frameworks as well, I could from time to time bring the “people from the basement” perspective. :-)

So, what did we achieve during that week? Maybe not a lot code wise (yet), but definitely a lot on the bonding and community front. That’s fine as it was the main goal!

I planned several sessions throughout the week to prepare the proper mindset. Of course it all started with hugs and massages (I’ve been told it relieves tensions, so it was a proper first step I think). Then we had a first meeting where Marco and Sebas presented the terminology and the concepts used around Plasma. It of course raised some controversy, but we quickly moved on for the time being as it was more about sharing the current state of affair, not more.

We then took on a long tour of group activities.

First Björn helped the people to build a set of personas to help thinking with the user point of view when dealing with our software. We came up with Carla and Raj who helped quite a bit during the sprint. Hopefully, they’ll help us more generally when designing to keep a user centric approach.

Then we had two innovation games named Speed Boat and Prune the Product Tree. They were respectively meant to figure out the pain points around the workspaces, and to find out the product core features and its dynamics. We did a terrific job on those games along the course of two days… They were exhausting for me though! Keeping your attention focused to facilitate the process, get the people to share, make sure everyone can talk, etc. Pfew! That wasn’t even the end of it all… I still had to process all the generated data!

Luckily, those games completely met my expectations so it was worth the effort. They indeed confirmed some of the assumptions we had about our products, but they also helped to discover some unsuspected dynamics. Of course I pushed all the data and results on our wiki.

We concluded this process with two meetings. The first one to revisit the terms and concepts extracted on the first day. Those terms and concepts got adjusted a bit, which is a very good thing, allowing everyone to appropriate them. The second one was more technical, and the people extracted together tasks to move the products forward. It helped fill up a Kanban that they’re supposed to use over the week-end now (I can only assume, I unfortunately won’t be there to live the experience, I had to get back home).

Of course, throughout the sprint, there was quite some slack in the schedule for the mandatory cooking activities (led by our own personal Dario The Cook), table tennis games, naps and messing around with the swimming pool. That helped keep a playful atmosphere which was definitely welcome.

Anyway, during this week it was fascinating to see less and less controversies appearing during discussions. They got replaced by more and more group thinking, consensus creation, etc. Definitely more pleasant for everyone. I dare believe the activities we proposed through the week helped pave the way of this shift of mindset. 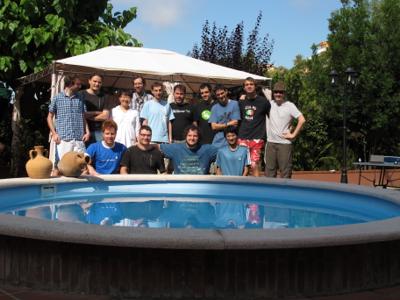 As you can see on that group photo, very nice atmosphere in the group this morning! I hope it’ll stick… only time will tell.

PS: For more pictures with sexy hackers or the usual sticky notes, I already uploaded them in the Sprint gallery