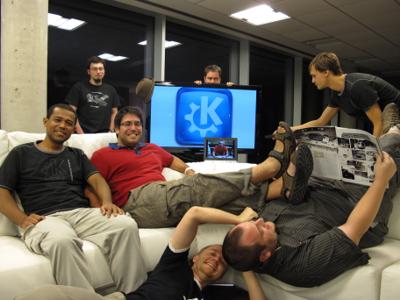 From September 29th to October 2nd, we had the yearly developer gathering of the Solid team in Madrid named Forge 2011. It’s the perfect opportunity for metalworkers to meet and make plans for the year to come.

This year was especially interesting because we had an usability expert on board which is a good thing for us metalworkers. We spend most of the time stuck in the middleware, but we also end up integration and presenting our work in the workspace where it should be easy and pleasant to use. I’ll cover that aspect in more details in a another post.

We also took some time to record a few videos, mainly a demo of a new feature and a couple of interviews with key people. Took me some time to put everything together, but it’s now in a state where I can share them!

Dario on Power Management and Multi-Screen

In this video Dario shows a nice new feature implemented thanks to the collaboration between power management and the multi-screen support. This way we can put in place refined policies on when to suspend or not.

# Björn about Usability In this video, Björn Balazs our resident usability person for the sprint talks about his job and what he worked on during the sprint.

# Lamarque about Network Management In this video, Lamarque Souza covers the work started during the sprint to revamp the network management support in the workspace. We also learn a bit more from his early KDE involvement.

# Dario on Power Management In this video, Dario explains the history of power management support in our workspaces. He covers quickly the past and gives us more clues about what is about to land in the next release. He also talks about his take on the interesting innovations in the community. PS: And yes, Dario is very tired in this video. We had to charge the battery of the camera, it went empty during the first take. So yeah, he actually meant "4.10" there's no plan for a "5.0" workspace yet. ;-)

# Alex on being the New Solid Maintainer In this last interview, featuring Alex host of the sprint and new Solid maintainer, I had to step up and be in front of the camera to conduct the interview... It was the last one, probably around 3 or 4 in the morning...

# B-Side! What Happened Behind the Scene... And last but not least, I kept quite a lot of the rushes and failed attempts. So I also put together a "B-Side" for the videos so that you can also witness the nice atmosphere we had during the sprint!

PS: I think there’s a bit of the video which might not be clear, so I’ll give a few words of explanation. When the red circle and arrow appear, look very closely in the circle. I’m actually crawling behind the couch to retrieve the remote control of the TV… I’m totally in stealth mode! Except that you can briefly see my hand which totally killed Alex’s concentration. Apparently it looked like the Thing in the Addams Family. If you couldn’t see it watch again, veeery closely, it’s furtive! :-)