So, I’m sitting right now in the KDAB’s Berlin offices for what’s probably the last dozen minutes of the KDE PIM Pain Points Sprint (at least for me, the other guys still have a couple of hours in front of them). We have been silent so far about what was going on there, and so I will take the microphone for a couple of minutes. At least we didn’t steal the thunder of the Woshibon guys (looks like they did a great job BTW looking forward for that to hit my desktop!).

If you follow my blog, you probably noticed that lately when I attend developer sprints I carry with me shoelaces, sticky notes and other materials to setup weird boards. When I arrived on thursday night, a surprise was waiting for me… 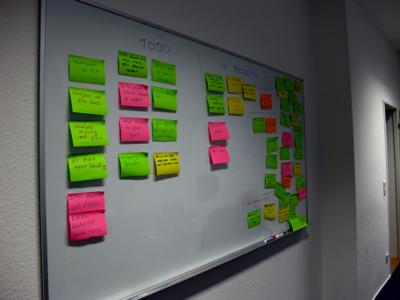 Yes, that neat whiteboard was waiting there to be conquered. I’m actually glad to see that it’s slowly turning into an habit to have this kind of things in our sprints. The culture is getting there and that makes me happy. We’re apparently ready to experiment with other techniques like the Innovation Games for instance (which we played for Platform11), etc. We’ll see what I can find to keep that fresh for everyone. ;-)

Anyway, as you probably can figure out from the picture above, it wasn’t taken on the first day but this morning. It started small, but as we were fixing issues we added more and more sticky notes, in a true flow base fashion… Since the pace was good enough we could tackle more than originally envisioned, of course we were also finding sub-issues or corner cases which required specific care.

In any case the amount of work done is impressive, I won’t get into the details there, but if everything goes well (pending some backporting) the next 4.7 patch release should have a few nice nuggets around performance, migration and even a bit of usability (I found a fix for a performance issue which turns out to be also responsible for the message list loosing its selection from time to time… I know everyone serious at email hate that one).

From the picture above, you can also see that the “Done” lane turned out to be too small to fit everything (looks like we were pessimistic on the amount of work which could be done), and someone expanded it partly into the “In Progress” lane giving it this weird shape… It looks fat isn’t it?

Well, fat… it’s unlikely we’ll turn up like that. There was so much focus on the work that we had to remind ourselves of stopping for food, hence a specific sticky note was inserted just for it. It’s an important task after all! ;-) 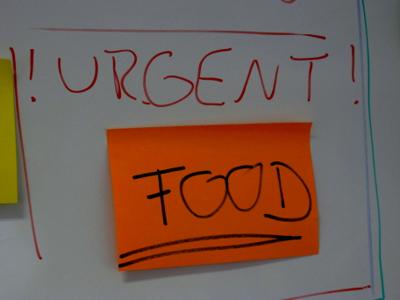 And if you wonder what focus looks like, I’ll leave you with a picture of our own Lord Volker of Akonadi slaying bugs. 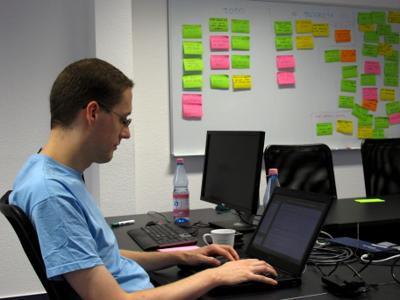 Impressive isn’t it? If you want to see a few more pictures, you can find them in the KDEPIM Pain Points Sprint Gallery available online. I didn’t take many this time, but you’ll see a few more people.

Now I should move back to the airport to catch my plane, see you later!