So, I wasn’t online much yesterday, mostly trying to recover from my traveling in the early morning. I had only four hours of sleep before jumping in my plane toward Amsterdam, but the trip was fairly uneventful and I arrived safely in Nijmegen… I admit I slacked quite a lot after that and caught myself falling asleep more than once at sebas’ place.

Yesterday we had the now traditional state of the union presentations to know where we are, and what are the goals of the different participants… Today the work really started, discussion topics for the week got listed, and I turned out being the agile coach setting up a small Kanban giving maximum visibility on the work going on during the sprint.

As we’re moving using bikes here (it’s netherlands after all), and since sebas’ let us use his front windows for the kanban, let me present you the current result of the Tokamak 5 bootstrapping, “Bikes and Sticky Notes”: 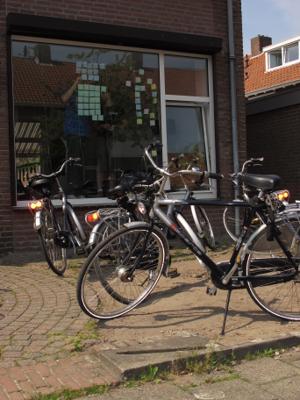 As usual now our goal is to move as many of those sticky notes from the left to the right, we’ll see how much of those will appear and travel on that window during the week!